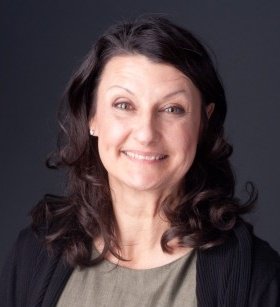 She had upgraded her custom-design jewelry store to shatterproof-glass display windows and showcases. Six cameras had been carefully placed at the best angles to capture facial images of any wrongdoers. She and her staff vigilantly recorded their observations in a suspicious-incident logbook and used code words to alert each other anytime they felt a customer’s behavior wasn’t quite right or perceived other potential threats.

At the cost of a daily commute of 40 miles in each direction, Denise had even relocated her business to a quiet “Mayberry” town where the crime rate was only 2%. The business is positioned on a street corner adjacent to the local police station.

Even after all of this, it turns out that some crime is simply unavoidable.

Crime in spite of deterrence

Despite Denise’s precautions, two armed and masked assailants robbed Denise’s store while she and one other store associate were working. The attack occurred in the middle of the day on Dec.12, 2013.

“I was sitting in my office and talking on the phone with a customer. The open-door buzzer sounded,” Denise said. “The lead robber was very fast and clearly knew what he was doing. He vaulted over the showcase, entered the office, and in less than two seconds I had a gun in my face.”

The other robber — a nervous first-timer, by Denise’s assessment — went into the basement to round up the other store associate and bring her upstairs. “They pulled our hair, forced us face-down on the floor, put their guns to the back of our heads, and demanded to know where the money was,” Denise said.

Denise directed the thieves to the money drawer. Their next order surprised her. “They demanded keys to unlock the showcases. This told me that they had been in the store before and had already determined that the showcases were made of shatterproof glass,” she said.

The assailants snatched merchandise from the showcases and an expensive item that belonged to a customer. “I had done some custom work on the piece just moments before the robbers arrived. I had put the item on the pickup/call counter for the customer’s impending arrival. Losing a customer’s jewelry to the robbery was the worst feeling — far worse than losing my own merchandise,” Denise said. She was relieved that the robbers had overlooked several of her other customers’ work-in-progress items that had been lying out on the work bench in her studio.

In less than seven minutes, the robbers were squealing their tires and barreling down a usually very busy one-way street to make their getaway.

The value of thinking ahead

Although her advance preparations did not prevent the robbery, in retrospect Denise asserts that those precautions and her ability to think on her feet were essential in protecting personal safety and mitigating the dollar amount of her loss.

3 Essential Precautions to Reduce the Chance of a Robbery

“I think the greatest benefit from our role-playing exercises and our advance planning was remembering to stay calm and not to resist during a robbery. Displayed in our coat room we have a Jewelers Mutual sign as a constant reminder to everyone to be cooperative in the event of a robbery,” she said. “It is paramount to focus on personal safety and to be assured that our insurance would replace the stolen merchandise,” she added.

“I didn’t challenge, didn’t look them in the eye, did what they told me, and even said ‘yes, sir’ to the leader, who was barking the orders. Believe it or not, I think using ‘sir’ helped to keep us safe.” Denise said. “I honestly doubt he has ever been addressed as ‘sir’ before. I think it helped him feel calmer and in control.”

Denise was able to use her cooperative posture as a way to motivate the assailants to get out of the store more quickly. “Before they started grabbing money and merchandise, the leader told his accomplice to turn out the lights. I respectfully advised against it, telling the leader that the police station was across the street and that the police would notice something wrong if the lights were to go out,” she said. “I think my comment about the proximity of the police station hurried them on their way.”

How to Stay Safe During a Robbery: The 8 Tips Jewelers Need to Know

Although the value of the stolen cash and merchandise was significant, Denise believes the thieves would have taken even more if she had not installed the shatterproof showcases.

Denise also believes she benefitted from some good decisions immediately following the robbery. Once she knew the robbers were fleeing and no longer posed a threat of personal harm, she activated her store’s holdup alarm and was able to observe the thieves’ departure.

She gave the police a partial license plate number, a description of the getaway vehicle, and their direction of exit. “I was instantly on the phone with the 911 operator who was putting out an APB even before my alarm company had notified the police station of our holdup,” she said.

Her next call was to her Jewelers Mutual agent.

According to Denise, there was a certain determined resolve that kept her calm during the robbery. “When you’re the owner, you have an obligation to your staff, your customers, and your store. That responsibility helped me to stay levelheaded during the chaos … to respond instead of react,” she said. 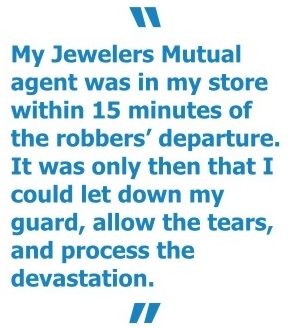 Soon, however, the effects of outrage, fear, relief, and a heavy dose of adrenaline kicked in. “My Jewelers Mutual agent, Larry Hyman, was in my store within 15 minutes of the robbers’ departure. It was only then that I could let down my guard, allow the tears, and process the devastation,” she said.

Consistent with her strong and self-reliant nature, Denise initially relied solely on her own emotional fortitude for coping and recovering. Several months after the event, however, she decided to take advantage of Jewelers Mutual’s benefit that subsidizes professional counseling for policyholders who need help healing psychological wounds after experiencing crime..

“It has been so essential in a total recovery. The effects of a violent event like this are much deeper and longer-lasting than you might originally imagine,” she said.

Although investigators have not yet charged individuals with this crime, Denise has made sure some good has come out of her unfortunate situation. Her willingness to share her experience and observations has resulted in additional guidance for fellow jewelers.

Denise’s discussions with her agent and Jewelers Mutual’s claims professionals inspired Jewelers Mutual to host a webinar: “Robbery: Before, During, and After.” She also provided valuable input in the development of Jewelers Mutual’s new Post-Robbery Checklist Flyer. This document lists specific steps for Jewelers to take “After the Robbery Has Occurred,” “After Calling the Authorities,” and “Throughout the Investigation.”