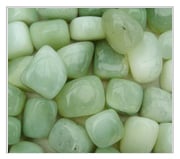 Summer is one of the best times of the year to tour Alaska. Come with us in this Gems by Geography entry as we explore the exquisite, natural beauty of their state gem - that big, sparkly rock for which Alaska is famous: Jade.

Touring Alaska, you can expect to see jade glimmering out of gift shops, adorning natives and glistening river beds. Alaska Jade is a stone valued by Alaskans for its luminescent colors and smooth surfaces.

Though jade is most commonly a turquoise-green shade, colors range from hues of green, to yellow, to red, black, and white. Lavender jade is the most highly valued because it is the most rare.

Many people assume that jade is easily found at Alaska's Jade Mountain, a mountain made completely of dark green jade. However, this Alaskan wonder is inaccessible to visitors, as it is situated on the remote Seward Peninsula.

Alaskan Jade is generally found in the Dall, Shungnak and Kobuk rivers. The Kobuk River has been a historically valuable source of jade. When the original Alaskans found the nuggets of jade that tumbled downstream, they used the gem to make tools, weapons, and jewelry.

Because of its smooth even texture, jade has long been a preferred material for carving. The most common shape is the flat donut-shaped disc called a pi, which is commonly worn as a necklace. 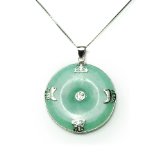 Although the overall color is the most important factor in assessing its value, translucency, texture, and pattern are also considered. Certain patterns, including moss in snow, are highly valued.

Ranked a 6.5-7.0 out of 10 on the Mohs scale (used to determine gem hardness), jade is a very tough gemstone. It is best cleaned with mild dish soap, warm water and a toothbrush.

If you’re looking for a special gift item, jade has been considered a symbol of love and has been known to increase a person’s capacity for giving and receiving love. It’s also known as a good luck and prosperity charm. 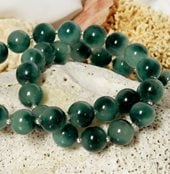 Jade has been treasured in China since as early as 2950 BC (AGTA), and was thought to preserve the body after death.

Usually cut into cabochons (smooth dome-like shapes), jade is very popular in Asian countries, where it is used to make beads, bangles and necklaces. Jade has even been found in many great emperors' tombs that are thousands of years old.

Another place that has always treasured jade is Central America, where the Mayans, Olmecs and Toltecs used jade carvings and masks.

Look forward to a very exciting road trip next month filled with some special surprises!