Robbery Prevention for Jewelers: How to Identify Casing

The total number of crimes and amount of losses in the jewelry industry declined year-over-year through the first six months of 2016, according to the Jewelers Security Alliance.

That’s great news, but there’s another fact jewelers can’t ignore: they are still being targeted!

This is especially true for retail jewelers, as criminals have become more aggresive when committing robberies, targeting more merchandise from higher-profile jewelers and using more force.

While these crimes make up only a small fraction of total criminal activity, the losses have contributed to a significantly larger proportion. To reverse this trend and finish the second half of 2016 on an even stronger note, jewelers need to ramp up robbery prevention efforts.

While having suitable physical and electronic security — like proper showcases and alarms — are essential, the biggest opportunity for jewelers to improve upon is procedural security. This is especially true when it comes to identifying casing.

Robbery prevention for jewelers hinges on the ability to recognize unusual behavior before it transpires into a potential crime.

Smash-and-grabs in 2015 followed a distinct pattern that has been observed in almost every prior year as well: 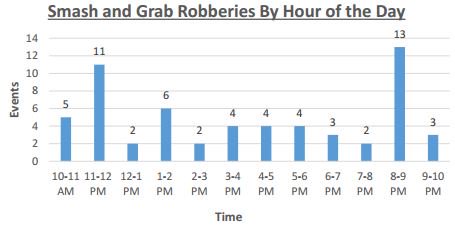 Criminals recognize that opening and closing are the most opportune times to commit a robbery. The best way for jewelers to turn themselves into a harder target is to open and close with multiple, well-trained employees who have inspected the inside of the premises and constantly observe what’s going on outside.

So far in 2016, the pattern has been similar, but something else stands out: 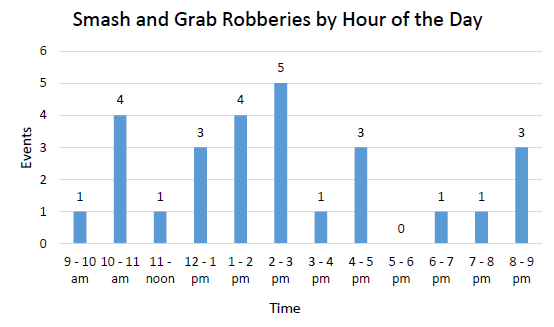 There’s an early afternoon spike that matches the level of activity typically seen around opening and closing. It’s difficult to determine the underlying nature of this trend, but a reasonable assumption is that customer traffic is slower during these times.

Criminals aim to strike when fewer people are present and because you may experience less business during the typical 9-5 working hours, they view this time as a lower risk of derailing their plans.

This also offers an explanation for why there are considerably fewer smash-and-grabs over the weekend:

To protect yourself during these times, make sure employees vary their scheduled lunch breaks and that your store is well-staffed with experienced employees at all times.

Ideally, every associate should be able to recognize behaviors and respond accordingly.

Instances like these should be alarming to anyone who experiences them:

These are just a few common examples that have been observed in past crimes. However, if you’re associates have a strange feeling about a situation, urge them to document it in a suspicious incident log and begin to inform others at your business.

Your local law enforcement and/or security company should be contacted as soon as possible too.

To help your business become more familiar with casing behaviors, enroll in JM University®. Every associate at your business can take courses like Selling with Security and Opening and Closing Procedures, which provide in-depth information about how to stay safe during potentially dangerous situations.