Do Your Diamonds Glow? 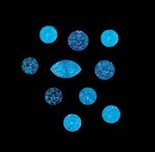 No April fooling. Retrieve the black light from your college days, and see if your diamonds glow and transform into a beautiful beckon of blue light.

It’s called fluorescence. And it’s a common phenomenon in diamonds when exposed to invisible ultraviolet rays.

According the Gemological Institute of America (GIA), approximately 25% to 35% of all diamonds submitted over the past decade exhibit some degree of fluorescence.

How does it happen?

Diamond is crystallized carbon. If there were traces of other minerals like the elements nitrogen or boron present in the earth when the crystallization process occurred, the diamond will fluoresce.

Blue is the most common color for the fluorescence, but you may also see orange-yellow.

In addition to color, fluorescence also varies by strength – from none, faint, medium, strong, and very strong, as described on GIA grading reports.

Is fluorescence good or bad?

As GIA indicates, the presence of nitrogen or other impurity atoms in the diamond crystal structure does not have any influence on the hardness or durability of a diamond.

The bottom line is that faint to slight and even medium blue has no impact on the diamond's appearance.

More than this (e.g. strong on grading certificates) can have negative or positive impacts depending on what color you’re purchasing, but strong fluorescence should be avoided when it makes the diamond appear 'milkish', like there is a fog or haze inside.

Some jewelers are creating one-of-a-kind jewelry with fluorescent diamonds set in the mounting to form designs or even messages, which can only be revealed when the jewelry is shown under UV light.

Think marriage proposal, anniversary, or any other special occasion you want to mark and let your heart-felt sentiments glow!

What do you think of fluorescent diamonds? Leave a comment below.