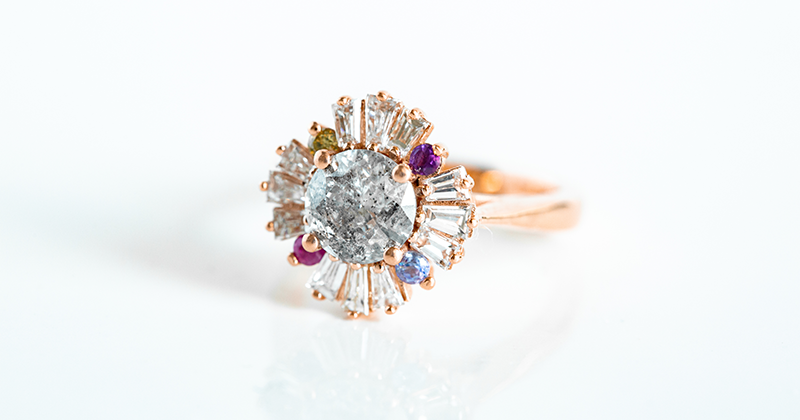 Customized gifts are meaningful gifts. Instead of gifting a random precious stone to your loved one, make your jewelry gift more personal by choosing the recipient's birthstone. (Or the birthstone(s) of her kids, like the ring above!)

Find the appropriate birthstone below and read a few interesting facts about it, as well as important cleaning and care information to keep that stone sparkling for years to come. 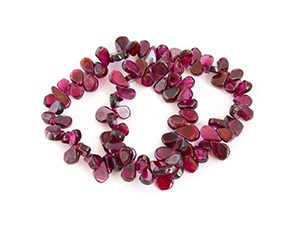 Garnet's name comes from the medieval Latin granatus, meaning “pomegranate,” in reference to its bright red color. However, garnet gemstones can also come in a variety of beautiful colors, such as orange, yellow, purple and green. And depending on the lighting, some garnets can change colors from blue to purple.

Garnet is a general sign of peace, prosperity and good health – perfect for celebrating the new year!

Much of the world's garnet supply comes from African countries, however, they are also found in Myanmar, Brazil, Iran, Afghanistan, Pakistan, India and Sri Lanka.

Depending on the type of garnet, they can range from 6.5 to 7.5 on the Mohs Scale of Hardness, which means that they can be susceptible to damage. Make sure they do not rub against any other harder gems while stored away or while you are wearing various types of jewelry

To clean garnet, all you need is warm water, a soft toothbrush and mild dish soap. 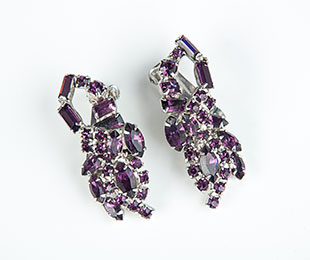 Amethyst comes from the Greek word amethystos, which means “a remedy against drunkenness." Since it matches the color of wine, early Greek mythology associated the gem to the Greek god of wine: Bacchus. So, those who wore this gem could clear their heads and become more quick-witted in both battle and business affairs.

Through the ages, this purple member of the quartz family has been used for everything from love charms to symbols of royalty. It's the rarest member of the quartz family and is largely found in Brazil. While it can be found in a variety of purples, the deepest purple is most valuable. And good news! No matter the shade of purple, amethyst looks great set in both yellow and white metals and can complement nearly every color in your wardrobe.

Amethyst has a ranking of 7 on Moh's Scale of Hardness, which makes it a nice gemstone for everyday wear. However, like garnet, it can be scratched by harder gemstones.

Make sure to clean your amethyst jewelry with mild dish soap and a toothbrush. Avoid exposure to high heat, which may cause its color to fade.

A mixture between blue and green, aquamarine is often compared to a light turquoise color. Aquamarine stones are considered more valuable as the blue color intensifies. When it comes to jewelry, you’ll have no trouble finding a plentiful selection of aquamarine pieces in a variety of blue-green hues.

This lovely blue stone can be cut in a variety of ways; however, aquamarine stones are mostly cut in an emerald shape, round or oval brilliants.

For hundreds of years it was called “The Sailor’s Stone,” due to its sea-like colors and was supposed to protect sailors and people traveling over water. At one time, people believed if this stone was emerged under water, it would have special powers.

You can find aquamarine in Brazil, many African countries such as Kenya and Madagascar and even the United States, specifically in Colorado and California.

Aquamarine is a great gem for rings and bracelets, as it has a hardness of 7.5 - 8. Caring for the blue gem is relatively easy. All you should need is warm water, mild dish soap and a soft toothbrush.

The diamond is one of the most sought-after gemstones due to its luster and sparkle. It's also the hardest substance known to man – made of carbon that is crystallized deep within the earth. Diamonds are mined all over the world, but most notably South Africa, the Democratic Republic of the Congo, Botswana, and Russia.

The diamond’s uniqueness has inspired legends. It’s been said that the Greeks saw diamonds as teardrops from the gods. Romans thought diamonds came from the falling stars that tipped the arrow of Eros, the god of love. For Hindus, diamonds were the lightning that armed the hand of the god Indra.

It's no surprise that diamonds have a ranking of 10 on the Moh's Scale of Hardness. Since this gem is so hard, diamonds can only be cut with other diamonds. We recommend cleaning your diamond jewelry with warm water, mild dish soap and a soft toothbrush. It's also advised to visit your local jeweler to inspect and clean your diamonds at least a couple times a year. 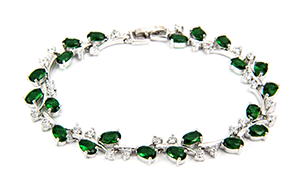 For over 4,000 years, emeralds have been treasured as a symbol of spring and immortality. Emeralds are also regarded as the gemstone that possesses the power to soothe the soul, improve memory and sharpen wit.

Columbia is one of the world's largest emerald producers. Columbia emeralds are prestigious, as they are the standard in which all other emeralds are measured.

Emeralds can also be found in Zambia, Pakistan and Afghanistan.

Emeralds have a ranking of 7.5 - 8 on the Moh's Scale of Hardness. Avoid cleaning emerald jewelry with hot soapy water and never clean them with an ultrasonic cleaner. Instead, clean in room-temperature water and use a soft toothbrush to gently remove dust from behind the stone. Also avoid exposures to heat and changes in air pressure - like an airline cabin. 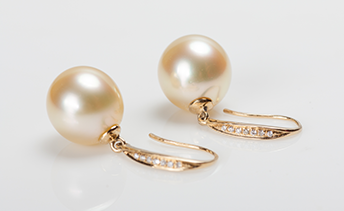 June's primary birthstone is the pearl, but the gemstones alexandrite and moonstone are also associated with June.

Let's talk about pearls. Unlike most gems, they have organic origins since they are created in certain kinds of mollusks. Pearls are the oyster’s secreted response to irritants that get lodged in their shells.

The pearl represents peace, beauty, happiness and friendship, and is considered one of the oldest known gemstones.

Pearls have a ranking of 2.5 - 3 on Moh's Scale of Hardness, which means they are very delicate. To properly care for pearls, it's recommended to wipe your pearls with a soft cloth after every use to prevent any buildup of oils. Clean with a damp cloth only as needed and make sure they are completely dry before storing. It's best to visit your jeweler a couple times each year for an inspection and thorough cleaning.

Ruby is the ultimate red gemstone and has been long considered the most valuable. To give you an idea of its magnitude, in the ancient language of Sanskrit, it is known as “king of the gems.” It's no wonder why July's birthstone has been known to represent courage, integrity, confidence and strength.

Rubies tend to be priced by color. The closer a gem is to vivid red or purplish red, the higher the value. They’re also rare and valuable in large sizes – a quality 4-carat ruby will sell for more than a top 4-carat emerald or diamond. Because rubies are of the hard mineral corundum, they are said to be the most durable gems.

Due to their strength and red fluorescence, rubies are also applied to non-jewelry related items, like watchmaking, medical instruments and lasers.

Rubies rank 9 on the Moh's Scale of Hardness. The only other gemstone harder than a ruby is the diamond. You can clean them with mild dish soap using a soft toothbrush.

The ancient Romans called it the “evening emerald” since it could still be visible by lamp light. Because of its bright green color, pirates believed that peridot would glow in the dark whenever it was near buried treasure.

Peridot ranks between a 6.5 - 7 on the Moh's Scale of Hardness. This gemstone cannot take hard wear like some others, so it's advised to not create rings with peridot. Never use steam or an ultrasonic cleaner. You can clean them with mild dish soap using a soft toothbrush.

We all think of September's birthstone as being a brilliant blue. But it can also come in a kaleidoscope of colors from gold, to reddish-orange and even violet. In fact, sapphire comes in every color but red, because a “red sapphire” is a ruby, sapphire’s gem sibling.

Sapphires and rubies are simply different colors of corundum, the crystalline form of aluminum oxide. Pure aluminum oxide is colorless, minute amounts of trace elements that create every conceivable color, referred to as “Fancy Sapphire.”

Here’s where sapphire colors come from:

Sapphire measures 9 on the Moh's Scale of Hardness making it the second hardest gem (behind the diamond, of course.) You can clean them safely with warm water, mild dish soap and a soft toothbrush. 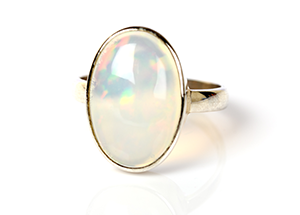 October has two birthstones, opal and tourmaline, but let's put our focus on opal. Since opal was first discovered in Australia, 95% of the world's supply comes from Australia. However, it can also be found in Mexico, Brazil, Honduras, Ethiopia, the Czech Republic and the United States, specifically Nevada and Idaho.

Back in the day, opal was known to benefit eyesight and has been used for everything from easing childbirth to bringing strength in battle. Long known as the “Wish Stone,” it is supposed to promote love and romance and grant wishes and personal happiness.

The most common colors of opal are green, blue, yellow and red. It also comes in black, which is the rarest and most valuable of the gem collection.

Opal has a hardness of 5.5-6 on Moh's Scale, so it requires a special level of care. Opal has been known to crack or "craze" under extreme temperature and direct sun light. You can clean this gemstone with warm water, mild dish soap and a soft toothbrush or cloth. Avoid cleaners and chemicals. 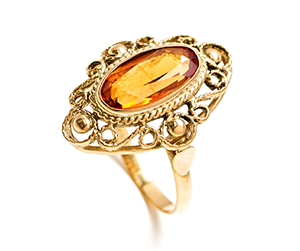 Topaz and citrine are associated with November, likely due to these gemstones looking very similar to each other. But since topaz is the primary birthstone of November, let's take a closer look.

Although topaz is found in a wide array of colors, yellow is this month’s dedicated shade. Some of its most common hues are brown, yellow, yellow-gold and orange. Pink and orange-reddish colors are the most valuable, while blue tends to be the most popular choice for jewelry.

Topaz measures 8 on Moh's Scale of Hardness, meaning that it is a durable gemstone. While it can still be prone to chipping and cracking, topaz is still considered a very wearable and durable gemstone. You can clean this gemstone with warm water, mild dish soap and a soft toothbrush. 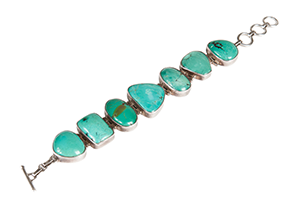 Turquoise is one of the oldest and best-known opaque gemstones and is also one of the first gemstones to be used in jewelry. With its robin’s egg blue hue, turquoise has graced the necks of Egyptian Pharaohs and adorned early Native Americans in their ceremonial dress.

Ancient Persia was once the source for turquoise, but now the United States - specifically Arizona - leads in production by value and quality.

Turquoise measures 6 on Moh's Scale of Hardness, which is no surprise, as it was used to decorate thrones, weaponry, clothing and much more. Turquoise can be sensitive to everyday items like perfume, makeup, natural oils and direct sunlight. You can clean turquoise with warm water, mild dish soap and a soft toothbrush. Do not submerge your turquoise in water.

Do you own any birthstone jewelry? Make sure to show it off!

And don’t forget to get your birthstone jewelry insured. Click the button below for a free jewelry insurance quote in less than a minute. No personal information required.

Want to take this guide with you? Download the PDF!