History of the Wedding Ring

We may not be in wedding season, but we're still happily celebrating couples’ everlasting love as they continue to share their excitement - and beautiful jewelry - with us.

But, why a ring? Why the left hand? Why the fourth finger? There’s much about the history of the wedding ring that remains a mystery, but here’s what we’ve uncovered.

History of the Wedding Ring

Some historians believe the age-old tradition of exchanging wedding rings comes from ancient Egypt, more than 4,800 years ago. Sedges, rushes and reeds, growing alongside the papyrus were twisted and braided into rings.

The circle was the symbol of eternity. The hole in the center of the ring was considered a gateway leading to things known and unknown. Much like today, to give a woman a ring signified never-ending love.

The materials these rings were made of didn’t last very long and soon were substituted with rings made of leather, bone or ivory. The more expensive the material, the more love shown to the receiver. The value of the ring also demonstrated the wealth of the giver.

Why do you place the wedding ring on the fourth finger?

Why are wedding rings placed on the left hand?

There are a few general ideas on this. One thought is as the man, facing his bride, reaches straight out with his right hand he naturally touches her left. Another is that the soft metal (traditionally gold) is less worn or injured on the finger of the left hand, due to most of the world being right handed - approximately 90% of the population!

Puzzle Rings: Centuries ago in the Middle East, a man would give his wife a puzzle ring. This complex piece of jewelry was several rings, that when worn together correctly, formed one cohesive band. Faithfulness was the idea behind this design. It was believed that if a woman took off her ring, she would not be able to put it back on. Therefore, her husband would know she'd been unfaithful. 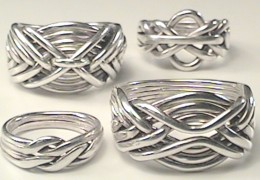 Gimmel Rings: The gimmel ring was popular in Europe during the 1500s and 1600s. Built similar to a puzzle ring, its design was meant to signify marriage and unity. Typically, it was comprised of two interlocking metal bands. After becoming engaged, a bride and groom-to-be would each wear one. Then at their wedding, the couple would reconnect their bands and form one ring for the bride to wear. 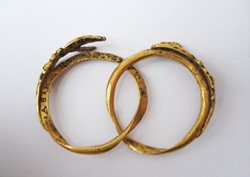 Poesy Rings: A poesy is a poem or ballad, which makes the name of this style so appropriate. Very popular during the Renaissance, a poesy ring was an engraved sterling silver band. The inscription was typically a love poem or other expression of love. 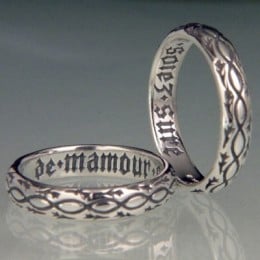 Thimbles: In the early days of Colonial America, a groom would give his bride a thimble. The trend started with Puritans who felt jewelry was frivolous. The thimble was acceptable because it was a practical item. Many women would eventually remove the tops of their thimbles, making them bands.

In life, a little rain must fall and it’s believed to be especially lucky if it does so on your wedding day. Other good-luck traditions from around the world include:

It's fun to learn about wedding traditions from around the world. And don't forget, it's also tradition to insure your precious wedding jewelry. Haven't insured your jewelry yet? Get a quote in a minute by clicking the button below. It costs less than you think.