January babies can be a dark bunch, at least when talking about January's birthstone hue. The garnet is the gem of the month and is most known for its deep red stone. Garnet got its name from the Roman word “granatus” meaning “seed,” since the gems were thought to resemble pomegranate seeds.

Did you know that garnet gemstones come in every color except blue? It’s true. Let’s explore their kaleidoscope of beauty and benefits. 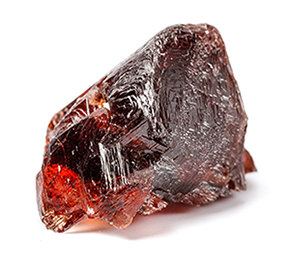 Red - Red versions were often worn by soldiers to heal wounds and stop blood flow. They were also said to promote true love, warn of danger by changing color, and protect the wearer’s home from fire and lightning.

Yellow - Yellow versions were thought to stimulate energy. Check out Grandma’s jewelry box for yellow-green and mid-green stones ... it could be a garnet. These hues are mostly found in antique jewelry.

Pink - The lighter, sparkling bright pinks can resemble pink sapphires. They were believed to attract romance and cure broken hearts.

Celebrating your second wedding anniversary? Give the gift of the 2nd year anniversary gemstone.

How to Clean and Care for Garnet

Though they are tough, special care must be taken, as some varieties can chip. If you’re wearing yours as a ring, look for a setting that protects the gem with metal. Also avoid steaming, abrupt temperature changes, and acids, which may damage gems. To clean garnet, the best advice is to use a mild dish soap and warm water.

For more jewelry care and cleaning tips, check out AGTA’s webpage on garnet.

Don't forget to insure your garnet jewelry! Get an insurance quote through Jewelers Mutual Group in under a minute. No personal information required.