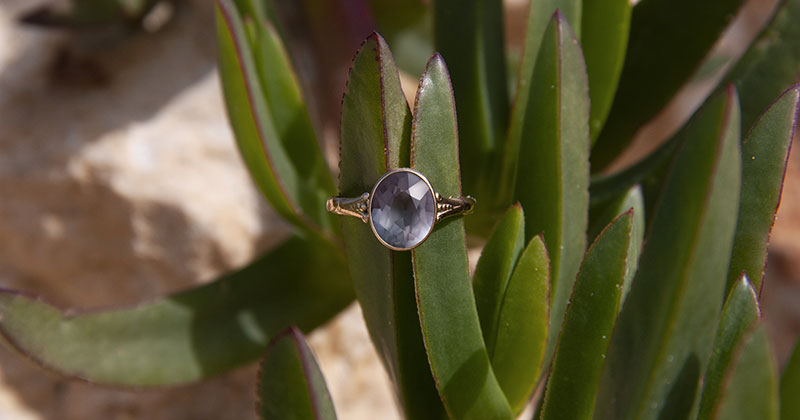 Happy birthday, fellow June babies! You get to brag about having not just one, or two, but THREE June birthstones to choose from. June's birthstones are the Pearl, Alexandrite (shown above) and Moonstone, depending on the resource ... or heck, your moods. It’s your prerogative!

Read on to learn all about June's birthstones.

Let’s talk about this gem first because it’s June’s primary stone. Unlike most gems, they have organic origins - created in certain kinds of mollusks. Gross but true, it is the oyster’s secreted response to a grain of sand that irritates it. Good thing they’re pretty!

The pearl represents peace, beauty, happiness and friendship, and is considered one of the oldest known gemstones.

More than 2,000 years ago, ancient Chinese believed they held the power of eternal youth. Even today, they are often ground up and used in Chinese cosmetics and serums to promote youthful looking skin. As a healing remedy, they are also believed to relieve eye ailments, heart trouble, indigestion, fever and bleeding.

As if that weren’t enough, pearls are viewed as a symbol of purity and are often given to celebrate a marriage or the birth of a child. Interesting bridal fact: In ancient Greece, it was believed that they had the power to prevent newlywed brides from crying and to promote happiness among all those who wore them. Keep the tissues at home, ladies. Wear a string and smile!

How do you shop for pearls? Look for the following:

1. Luster – the brilliant sheen and deep inner glow signifies its value. Those that look too dull or chalky are a sure sign of poor quality.

2. Clean Surface – Since cultured pearls are grown by live oysters, it’s rare to find a pearl whose surface is completely free of blemishes. The less bumps, cracks and indentations, the more valuable it will be.

3. Shape – The oyster’s ability to produce a perfectly round pearl is rare and quite valuable.

Not sure how to clean pearls? They require special care compared to your other jewelry items, so make sure you know the proper steps!

The Alexandrite - a variety of the mineral chrysoberyl, named after Prince Alexander of Russia - has the most dramatic color changes of all gemstones, turning green in daylight or fluorescent light, to purplish red in incandescent light.

The more complete the color-change from green to red without melding into brown, the more rare and valuable the stone.

It’s a symbol of confidence, balance, joy and good fortune.

Moonstone, a variety of feldspar, named for its resemblance to the iridescent sheen of the moon, varies in color from clear to blue-white or peach. It is also a symbol of health and longevity.

Ancient civilizations considered it to be a sacred stone, and some believed that the moonstone could even make a person invisible. Legend has it that you can see the future if you hold a moonstone in your mouth during a full moon.

Click here to view some beautiful moonstone jewelry from Etsy.

Looking for more gemstone education? Refer to the Gem Institute of America's Guide to Gemstones!